As chief botanist of the Okapi Faunal Reserve, Corneille Ewango stayed during the civil war to protect the reserve’s rare animals and plants and confronted military commanders to stop poaching.

In his youth, Corneille Ewango helped his uncle who was an elephant poacher by collecting ivory tusks. As he grew older and his knowledge of the forest also grew, he embraced ecology and conservation. His passion became botany. As a staff member of the Congolese Institute for the Conservation of Nature and the Wildlife Conservation Society’s Democratic Republic of Congo program, he was responsible for the Okapi Faunal Reserve’s botany program from 1996 to 2003. Ewango helped lead the effort to protect and preserve the Okapi Reserve through nearly a decade of civil war in the Democratic Republic of Congo (DRC).

The rainforest of the DRC represents approximately half of Africa’s tropical moist forests and one-eighth of all tropical rainforests in the world. Unparalleled natural assets lie in the Ituri Forest, where the Okapi Reserve was created in 1992. The reserve covers more than 3 million acres, and houses 13 primate species, elephants, and animals found nowhere else on Earth, including the okapi, a forest giraffe. It also is home to the Mbuti people, commonly known as Pygmies, who have an extensive knowledge of the Ituri Forest. The survival of the reserve and the Mbuti are inextricably linked.

Amid political corruption, economic instability, and a civil war that lasted from 1996 to 2002, Ewango applied scientific fact-finding and grassroots mobilization to protect the reserve. For example, by marking and measuring large research plots, he uncovered 600 tree species and 270 species of lianas (tropical vine plants). In the United States and Canada combined, there are 700 species of trees.

Commonplace during the war was the illegal land grab for timber and gold, diamonds, and coltan, a mineral used in cellular phone technology. Chaos spread and, by 2001, most of the Okapi Reserve’s senior staff had fled. Ewango stayed, bolstered by 30 junior reserve staff and 1,500 local residents who rallied around him. Courageously, he helped rebuild the confidence of those who had witnessed mass murder and rape, and together they worked to protect the reserve during the region’s worst fighting. Ewango also ensured the survival of the 14 okapi living at the reserve headquarters’ zoo.

In the very forest that Ewango sought to protect, he hid the reserve’s herbarium collection, computers, research, and data on 380,000 trees. To save his own life, he also hid himself in the forest for three months. As fighting in the reserve continued, poaching of primates and elephants became rampant. Ewango directly confronted military commanders and informed them of regulations prohibiting poaching. The practice was curbed.

When the war ended in 2002, the reserve was intact. Due in part to Ewango’s bravery, a number of poachers were arrested or exiled, and injunctions against mining within the reserve were created. In recognition of his noble efforts, Ewango’s international colleagues insisted he continue his studies. He received a scholarship for a master’s degree in tropical botany at the University of Missouri. In 2007, he gave a TED talk about his conservation work. 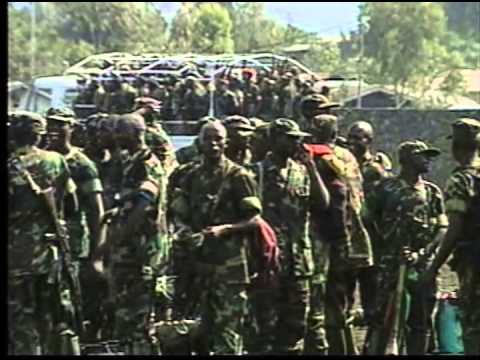 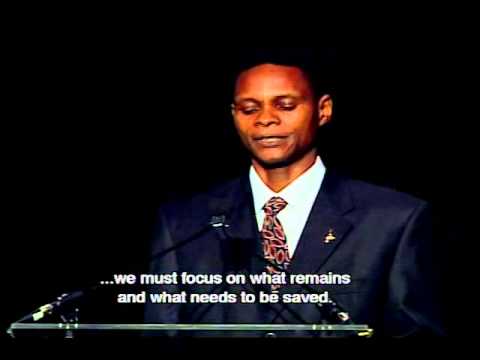 Children in the village of Epulu in the Okapi Faunal Reserve, Democratic Republic of the Congo, 2004.

Corneille Ewango, 2005 Goldman Environmental Prize Winner, Africa (Democratic Republic of Congo), on a bridge over the Epulu River that was targeted during the civil war. Ewango hid out at the foot of the bridge before he could safely cross.

Guards from the Okapi Faunal Reserve performing morning exercises. They protect the reserve from poachers, loggers and miners. Corneille Ewango, 2005 Goldman Prize Winner, Africa (Democratic Republic of Congo), has been central in the protection efforts.

What do Ben Affleck, Cindy McCain and Corneille Ewango (2005) have in common? An understanding that local communities working together at the grassroots level is the surest way to defeat ...Read More

2005 Recipient for Islands and Island Nations