Ka Hsaw Wa fled Rangoon after being tortured for opposing a brutal military government and documented thousands of criminal and human rights abuses by the government related to construction of the Yadana petroleum pipeline.

Ka Hsaw Wa was born a member of the Karen, one of Burma’s many ethnic minorities that has long been discriminated against by the ruling military regime in Burma. In 1988, when he was just 18 years old, Ka Hsaw Wa joined a massive student demonstration, demanding human rights, democracy, and an end to military rule. He was arrested and tortured for three days. The nationwide, peaceful protests ended in violence when the military dictatorship killed an estimated 10,000 people in one of the most ruthless and bloody crackdowns in recent history.

Ka Hsaw Wa was forced to flee his home and go into hiding in the deep forests near the Thai border, where he discovered that human rights abuses against Burmese minorities were extensive. Soon he realized how intimately these abuses were connected to the exploitation of natural resources.

In order to acquire the foreign currency needed to maintain its illegitimate hold on power, the military junta sold huge logging, fishing, and gem concessions, as well as a major natural gas concession with its related overland pipeline. In pursuing these projects, the military has committed a variety of severe and pervasive human rights violations. Ka Hsaw Wa traveled to militarized areas, often at great risk to his life, in order to document the destruction and abuse. In 1995, he co-founded EarthRights International (ERI) with the express purpose of exposing and raising awareness of the inextricable links between human rights and environmentalism in Burma and beyond.

Since the early 1990s, Ka Hsaw Wa has interviewed more than 1,000 victims and witnesses of human rights and environmental abuses, and delivered this information to the international community. He has provided one of the only sources of information about how the Burmese army arbitrarily detains, tortures, rapes, intimidates, and summarily executes indigenous villagers in the name of development. He has also documented how the army forcibly relocates villages and made villagers work as laborers. Ka Hsaw Wa trained a team of monitors who have been documenting these abuses, as well as the increased logging, hunting of elephants and tigers, and illegal wildlife trade.

Much of Ka Hsaw Wa’s work has focused on documenting human rights and environmental abuses associated with the Yadana Gas Pipeline Project—the largest foreign investment in Burma. The pipeline project involves a consortium including transnational corporations UNOCAL (US) and Total (France) which have contracted with the Burmese army to provide security for the project. The project traverses the Tenasserim rainforest, inhabited by diverse ethnic peoples and home to the tiger, the Asian elephant, the rhinoceros, and many other rare and endangered species.

The information that Ka Hsaw Wa has collected has been one of the only sources of documentation from the pipeline region of Burma, and has formed the basis for numerous reports, testimonies, and a groundbreaking lawsuit in US federal court. This lawsuit made legal history by being the first case in which a US judge granted jurisdiction over a private company for human rights abuses abroad. In 1998, his efforts helped block a World Bank guarantee for a multi-million dollar loan intended to build a Thai power plant that would process Yadana gas. Because of opposition to the pipeline, the Yadana gas pipeline missed its start date of July 1, 1998. 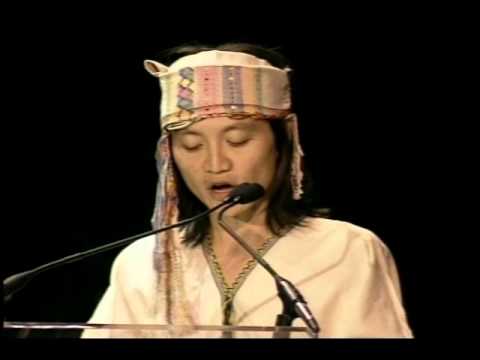 By Ellen Lomonico This interview was conducted on January 18, prior to the military coup d’état in Myanmar* on February 1, 2021. Since then, we have been in contact with ...Read More

‘Not a Report to Despair Over’: IPCC Gives Humanity Clear Directive to Act Boldly and Urgently

Activists Talking: Protest in a time of Climate Crisis

1999 Recipient for Islands and Island Nations

1999 Recipient for South and Central America