A social worker and activist, Libia Grueso secured more than 5.9 million acres in territorial rights for the country’s Afro-Colombian communities despite life-threatening circumstances.

Libia Grueso, a social worker and co-founder of the Process of Black Communities (PCN), has been called one of the most prominent intellectual-activists in the Afro-Colombian civil rights movement. In the early 1990s, together with other movement leaders, she led a campaign that secured more than 5.9 million acres in territorial rights for Colombia’s black rural communities. Grueso also focused on protecting Colombia’s Pacific rainforest, a region facing the escalating threat of armed conflict, environmental ruin, and the mass displacement of Afro-Colombian villagers.

Colombia ranks among the top five nations with the greatest diversity of plant and animal species in the world; more different kinds of birds and amphibians make their home here than in any other place on the planet. Yet a long history of colonial exploitation coupled with four decades of the “dirty war” and a thriving narcotics industry have created an ecological catastrophe. These activities have destroyed nearly 30% of tropical forests and threatened numerous animals and plants to the point of extinction. The nation’s fresh water supply is expected to plummet by 40% over the next half-century.

Forgotten and relatively isolated for a long time, Colombia’s Pacific Coast region, situated between the westernmost chain of the Andes and the Pacific Ocean, is home to 30% of Colombia’s 10.6 million Afro-Colombians, the black descendants of slaves emancipated in 1851 without any reparations. Afro-Colombians make up 26% of Colombia’s total population. Yet in the 1980s, the coast—the country’s poorest region—began attracting the attention of overseas developers. Multinational corporations moved in to exploit its natural riches, such as gold and oil, and to introduce foreign mono-crops like the African palm. In the years that followed, armed groups from both sides of Colombia’s civil war have intensified their incursions in pursuit of their cut of the profit, including the introduction of illicit crops, such as coca, causing terrible and widespread devastation. In 2004, up to 200,000 acres of Pacific rainforest were being destroyed each year by industrial gold mining in an area already devastated by heavy logging. This had an impact on the traditional indigenous and black settled cultures, affecting their social relations and their links with nature.

The power struggle over the coast’s resources resulted in the systematic displacement of more than one million Afro-Colombians and, in some cases, entire villages. In many of their territories, Afro-Colombians have found themselves literally in the line of fire between government forces and armed actors operating outside the law who are in dispute over territory, agricultural and mineral profits, and control of illicit crops.

On May 2, 2002, in one of the worst mass killings to date, an estimated 120 Afro-Colombians from Pacific communities were killed when a bomb launched by the Revolutionary Armed Forces of Colombia (FARC) landed on a church in Chocó, the state with the largest population of Afro-Colombians. These killings came on the heels of massacres in Alto Naya, where 150 people were murdered and quartered with chain saws, and on the shores of the Yurumanguí River, where 12 were also killed. These incursions have caused massive displacements, with 7,200 displaced persons recorded in the port city of Buenaventura alone between 1999 and 2001.

Against this deadly backdrop, Grueso and her fellow activists’ strong belief in building an inclusive democratic country respectful of differences made PCN one of the single most visible and effective sectors of the Afro-Colombian social movement. A critical victory came in 1993 with the passage of “Law 70.” Grueso was instrumental in pushing through this historic legislation that officially granted Afro-Colombians legal recognition as a distinct ethnicity with cultural and territorial rights on the lands they have populated for hundreds of years. The work carried out by Grueso together with Mercedes Moya, as delegates of the newly-formed PCN to the 1991 Constituent Assembly, proved decisive in the inclusion of Transitory Article 55, which recognized the cultural and territorial rights of the black river communities on the basis of their traditional production practices.

The PCN and Grueso used Law 70 to successfully challenge destructive development projects, including timber industry logging, African palm oil plantations, mechanized gold mining, and industrial shrimping, which devastated local mangroves. They also secured increased government restrictions to mitigate environmental and cultural damage along the coast. To support the recovery of traditional farming and strengthen their cultural identity, Grueso organized educational workshops aimed at renewing rice and sugar cane cultivation along the Yurumanguí River so that river communities can grow their own food and be economically self-sufficient.

Activists like Grueso who have proposed sustainable development models sensitive to cultural and environmental concerns have found themselves at odds with private interests—often at a risk to their lives. Some have been persecuted and singled out; others have been murdered. In 2003, an Afro-Colombian running for mayor of Roberto Payan city, and also an advocate of Law 70/93, was killed for openly criticizing guerrilla activities in his locale. In 1998, Francisco Hurtado, the first president of an Afro-Colombian community council, was assassinated by paramilitaries while carrying out a census of his community on the Mira River. Hurtado had won a legal action (for protective relief) against the environmental abuse committed by mining operators and palm growers in his territory. In 2002, Sister Yolanda Cerón, a supporter of Law 70 and of the preservation of traditional crops along the Patia River, was also murdered. Her death shocked the entire country. In 2001, seven environmentalists were murdered while hiking in Puracé National Park. This history of selective assassinations of Afro-Colombian leaders on the coastal region of Nariño has been repeated 75 times since 1998.

Despite these dangers, Grueso and other PCN members pressed on, driven by a broad sustainability plan for the entire Pacific region that reflects a vision of development grounded in Afro-Colombian and indigenous cultural and environmental values. Grueso worked at the institutional level to protect Colombia’s national parks, particularly the parks located in the Pacific region, from drug fumigation and the threat of privatization. The Colombian government steadily cut back the park department’s staff and funding as it sought to hand over management of the park to private entities. Grueso was critical of this scheme, which was in direct violation of the park’s original management plan, an innovative partnership between park officials and community leaders.

Grueso has been widely perceived as one of the most inspiring leaders at the forefront of Latin America’s “Black environmentalism” movement, one of the most exciting and important grassroots movements in recent times for championing human rights and the environment against the pressures of the global economy and military repression.

Grueso traces the roots of her own activism to a childhood spent as the daughter of a fisherman and teacher in the jungles of the Pacific coastlands, where villagers rowed canoes up and down the river, men hunted wild pigs, and children were taught to respect nature. She remembers watching this world erode under the pressures of aggressive economic development that decimated large swaths of the jungle for lumber and ruptured the tightly-knit community of her youth.

Grueso and 120 organizations that constitute the PCN continued to pressure the Colombian government to take a stronger stand for sustainable development and against measures and militaristic organizations that exacerbate armed conflict. She has spoken out against US and European aid and investment in Colombian operations linked to violence and human rights violations in meetings with US Congress members and advocacy groups, at talks at colleges through the US and Canada, and in meetings held by global trade institutions such as the World Trade Organization. 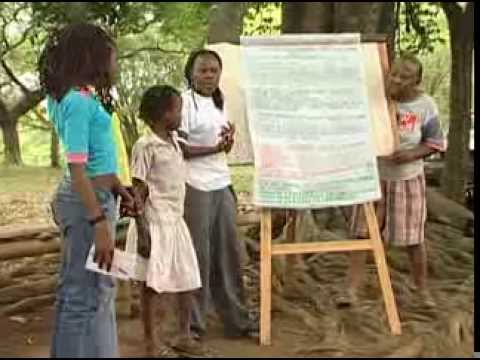 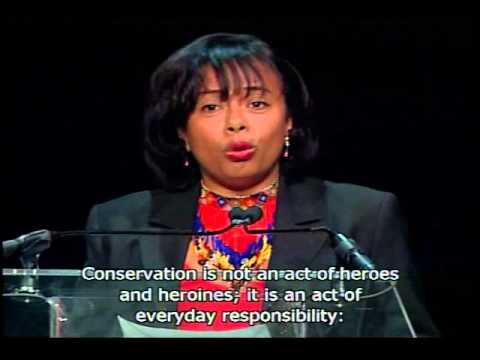 Libia Grueso, 2004 Goldman Environmental Prize Winner, Central & South America (Colombia), co-founder of Proceso de Comunidades Negras, on right with pink shirt, during a site visit along the Yurumangui River with board members of the Danish foundation Solstice and PCN staff in 2002.

Libia Grueso, 2004 Goldman Environmental Prize Winner, Central & South America (Colombia), co-founder of Proceso de Comunidades Negras (PCN) in foreground, right, during a site visit along the Yurumangui River with board members of the Danish foundation Solstice and the PCN staff in 2002.