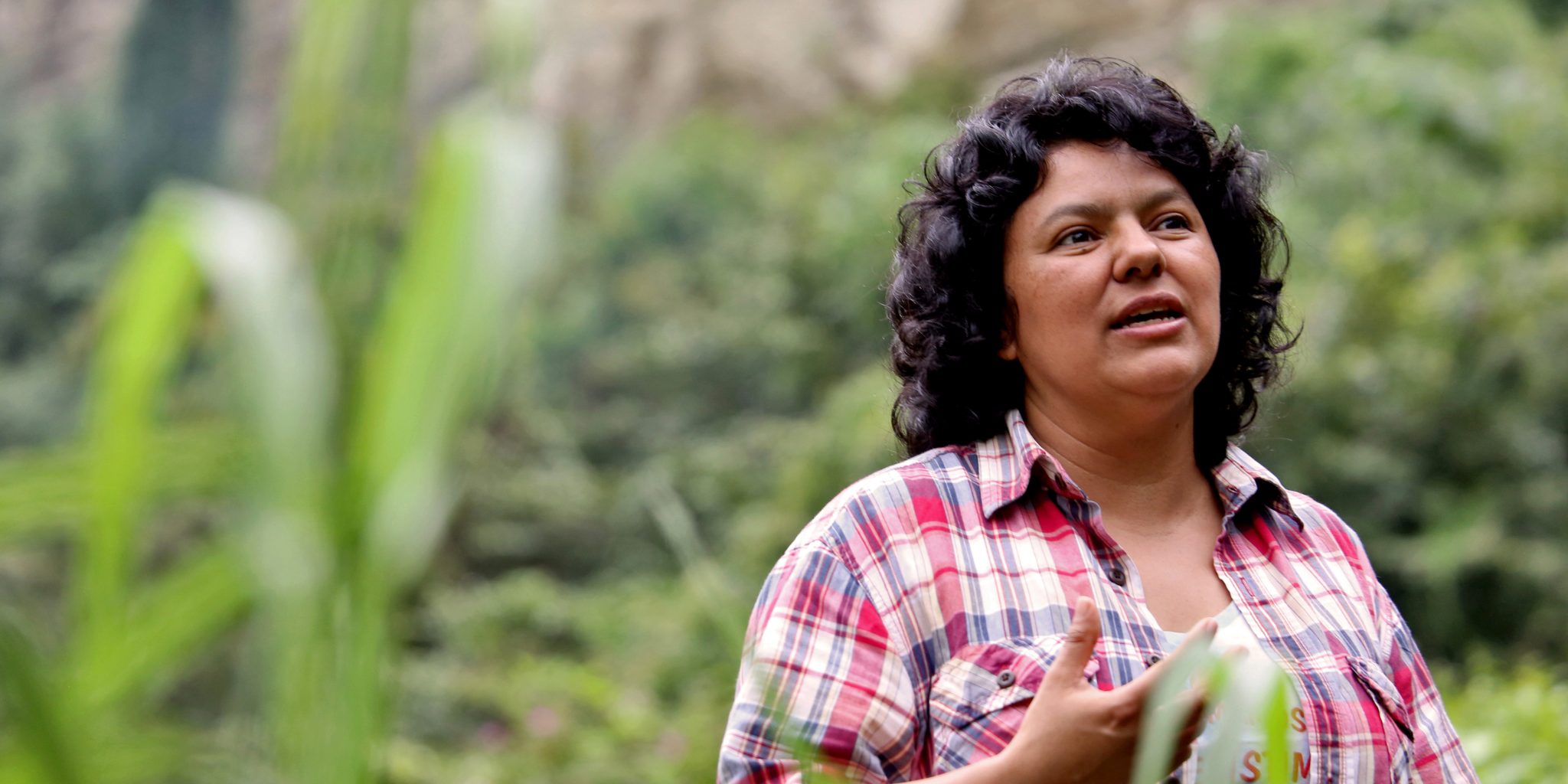 In a country with growing socioeconomic inequality and human rights violations, Berta Cáceres (d. 2016) rallied the indigenous Lenca people of Honduras and waged a grassroots campaign that successfully pressured the world’s largest dam builder to pull out of the Agua Zarca Dam.

In a country with growing socioeconomic inequality and human rights violations, Berta Cáceres (d. 2016) rallied the indigenous Lenca people of Honduras and waged a grassroots campaign that successfully pressured the world’s largest dam builder to pull out of the Agua Zarca Dam.

Since the 2009 coup, Honduras has witnessed an explosive growth in environmentally destructive megaprojects that would displace indigenous communities. Almost 30 percent of the country’s land was earmarked for mining concessions, creating a demand for cheap energy to power future mining operations. To meet this need, the government approved hundreds of dam projects around the country, privatizing rivers, land, and uprooting communities.

Among them was the Agua Zarca Dam, a joint project of Honduran company Desarrollos Energéticos SA (DESA) and Chinese state-owned Sinohydro, the world’s largest dam developer. Agua Zarca, slated for construction on the sacred Gualcarque River, was pushed through without consulting the indigenous Lenca people—a violation of international treaties governing indigenous peoples’ rights. The dam would cut off the supply of water, food and medicine for hundreds of Lenca people and violate their right to sustainably manage and live off their land.

The Makings of an Activist

Berta Cáceres, a Lenca woman, grew up during the violence that swept through Central America in the 1980s. Her mother, a midwife and social activist, took in and cared for refugees from El Salvador, teaching her young children the value of standing up for disenfranchised people.

Cáceres grew up to become a student activist and in 1993, she cofounded the National Council of Popular and Indigenous Organizations of Honduras (COPINH) to address the growing threats posed to Lenca communities by illegal logging, fight for their territorial rights and improve their livelihoods.

A Community Rises in Defiance

In 2006, community members from Rio Blanco came to COPINH asking for help. They had witnessed an influx of machinery and construction equipment coming into their town. They had no idea what the construction was for or who was behind the project. What they knew was that an aggression against the river—a place of spiritual importance to the Lenca people—was an act against the community, its free will, and its autonomy.

With mandates from local community members at every step of the way, Cáceres began mounting a campaign against the Agua Zarca Dam. She filed complaints with government authorities, bringing along community representatives on trips to Tegucigalpa. She organized a local assembly where community members formally voted against the dam, and led a protest where people peacefully demanded their rightful say in the project.

The campaign also reached out to the international community, bringing the case to the Inter-American Human Rights Commission and lodging appeals against the project’s funders such as the International Finance Corporation (IFC), the private sector arm of the World Bank.

Ignoring these appeals, the national government and local mayors forged ahead. They doctored minutes from a community meeting to paint a false picture of unanimous approval for the dam, and offered cash to local people in exchange for their signature on documents declaring their support.

In April 2013, Cáceres organized a road blockade to prevent DESA’s access to the dam site. Using a carefully organized system of alerts to keep everyone in the loop, the Lenca people maintained a heavy but peaceful presence, rotating out friends and family members for weeks at a time. For well over a year, the blockade withstood multiple eviction attempts and violent attacks from militarized security contractors and the Honduran armed forces.

Honduras’ violent climate is well known to many, but few understand that environmental and human rights activists are its victims. Tomas Garcia, a community leader from Rio Blanco, was shot and killed during a peaceful protest at the dam office. Others have been attacked with machetes, discredited, detained, and tortured. None of the perpetrators have been brought to justice.

Against these odds, Cáceres and the Lenca community’s efforts successfully kept construction equipment out of the proposed dam site. In late 2013, Sinohydro terminated its contract with DESA, publicly citing ongoing community resistance and outrage following Tomas’ death. Agua Zarca suffered another blow when the IFC withdrew its funding, citing concerns about human rights violations. To date, construction on the project has effectively come to a halt.

Death threats to Cáceres continued until March 3, 2016, when she was killed by gunmen in her home in La Esperanza, Honduras. Her death, followed by the killing of her colleague and fellow COPINH member Nelson García just 12 days later, sparked international outrage. Dutch development bank FMO and FinnFund have since suspended their involvement in the Agua Zarca project.

A Honduran court ruled in 2018 that executives of DESA ordered the killing of Cáceres. Seven men were found guilty of the murder and sentenced to 30 to 50 years. The president of DESA has been arrested and the case is ongoing. Cáceres’ family continues to seek justice through a thorough investigation of the intellectual authors of her murder. COPINH and fellow activists continue her enduring legacy, fighting irresponsible development and standing up for the rights of the Lenca people in Honduras.

From the Goldman Blog

Fighting for their Lives: Exposing the Growing Violence against Environmental Activists